The vegan loonies are currently celebrating Nabisco changing its animal crackers box design this week. While the box art has—for 116 years—featured the animals in enclosures, the new design features the animals outside cages. Nabisco made the change after getting an unsolicited letter from PETA.

Animal crackers mascots are not real animals. They are illustrations on a box. An artistic design.

Since PETA has now anointed itself as art censor, what other works can it go after? 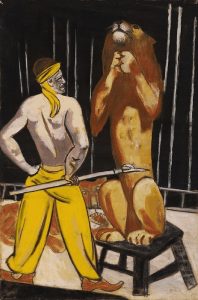 The Lion Tamer by Max Beckmann is a 1910 work of art featuring a lion and his trainer in a circus. Obviously, PETA is opposed to the use of animals in entertainment—even depictions, as recent news proves. PETA would likely prefer this art out of the public eye, or even out of existence.

(PETA’s not the only one. This painting was recovered from a hidden stash of “degenerate art” which the Nazis seized in Germany.)

And what about Isaac van Amburgh and his Animals painted by Sir Edwin Henry Landseer in 1839? The painting was commissioned by Queen Victoria and depicts the moment one of the most famous animal trainers shared a cage with his animals.

Will PETA petition the Royal Collection to liberate the animals from Landseer’s painting? Surely times have changed and it’s no longer acceptable to have such depictions. PETA probably doesn’t mind the man in there though—in fact, PETA members have a history of being behind bars.

PETA may also turn its sights on Georges Seuret’s incredibly famous A Sunday Afternoon on the Island of La Grande Jatte. After all, the painting depicts dogs (and a monkey) as pets, and PETA has a vocal history of opposing pet ownership—even to the point of killing pets. Surely, PETA knows better than Georges Seuret how his painting should look.

Now that PETA is attacking artistic depictions of animals, it shows just how rabid the group has become over the years, unable to separate reality from fantasy. The Ringling Brothers Circus may have closed up last year, but PETA’s recent feats have proven to be a circus of their own.

Posted In: Radical Activism
PETA has killed tens of thousands of animals since 1998 and we're making sure the whole world knows. Have a tip or something else we should know? Get in touch on our contact page.